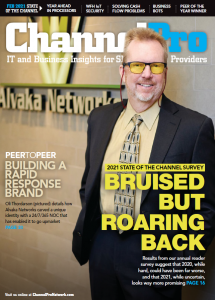 Featured on the cover of ChannelPro SMB February 2021 issue, Alvaka Networks CEO, Oli Thordarson, explains how Alvaka was able to carve a unique identity as a rapid response and recovery brand through peerless execution and a 24/7/365 all US-based recovery team.

Twenty years ago, Alvaka President and CEO, Oli Thordarson, recognized the need to carve a unique identity for himself and his team. Determined for Alvaka Networks to be remembered as a business not only capable of a rapid response, recovery, and prevention, but also one that out-competed other competitors, Oli prioritized building and staffing a 24/7/365 network operations center (NOC). This step proved to be a crucial component in continued growth, and as a result, Alvaka saw itself move upmarket.

The significant investment needed for the NOC, building a professional team, and maintaining the hardware and software, proved time-over-time to be a worthy investment. Even with the devastating financial impact of COVID-19 for many companies around the world, Alvaka Networks was able to grow revenue 14% in 2020 – a testament to the business model it implemented over many years.

Click HERE to read the full article at ChannelPro Network.

Oli has nearly 40 years of experience running his own companies in the Information Technology industry and is proud of the success of his entirely self-funded companies. Oli was founding chairman of Intel backed Global MSP Network in 2001, has served on the board of CompTIA, as well as served in the editorial advisory council for computer industry publications and blogs. Oli also currently serves on the advisory board of Discovery Science Center.

Alvaka Networks is noted for its many industry awards, including: Platinum Award for Best Practices in Managed Services at the N-fluence Managed Service Conference, one of the “20 to Watch” by CRN magazine, and the NASBA Top VAR award. Other awards include Gartner Group VAR Vision Business Achievement Award, and the Solution Integrator award for Best Remote Network Management Solution. Oli has been personally named as one of the computer industry’s Top 20 Visionaries and BTA Award of Excellence.